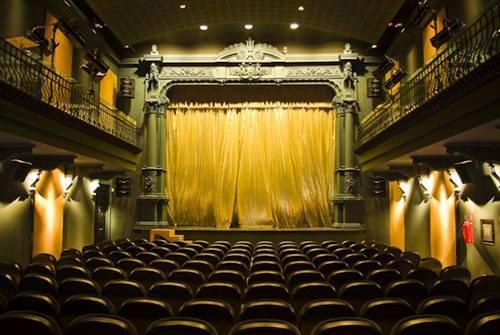 The theatre building was erected in 1887 and named Teatro Giuseppe Verdi. The original appearance has been preserved mainly on its front side, while its interior has been adapted to fit the needs of the Open University. Today the audience area has 227 seats. It hosts theatre performances and film screenings, but is also used by the local associations, public institutions and other interested parties. The theatre season lasts from October to May, offering a variety of performances, from children's plays on Sundays, dance performances, thought-provoking dramas and comedies of Croatian and international theatre companies, to the productions of the Open University's Čin, čin drama studio founded in late 2018. MOT 08 and USB are the town’s two NGOs engaged in performing arts, and the recently founded Art School produces up to two dance shows a year. No performances are held in the theatre during the summer break as the entire Old Town turns into an outdoor stage for various events.

This unique Istrian festival of seriously good comedy and laughter has been taking place in early March every year since 2008. So far it has hosted the most eminent Croatian theatre companies, independent productions and international theatre groups, and continues down its road to success by carefully selecting both performers and theatre pieces. The show that earns the longest and the loudest applause from the audience wins the festival's award!