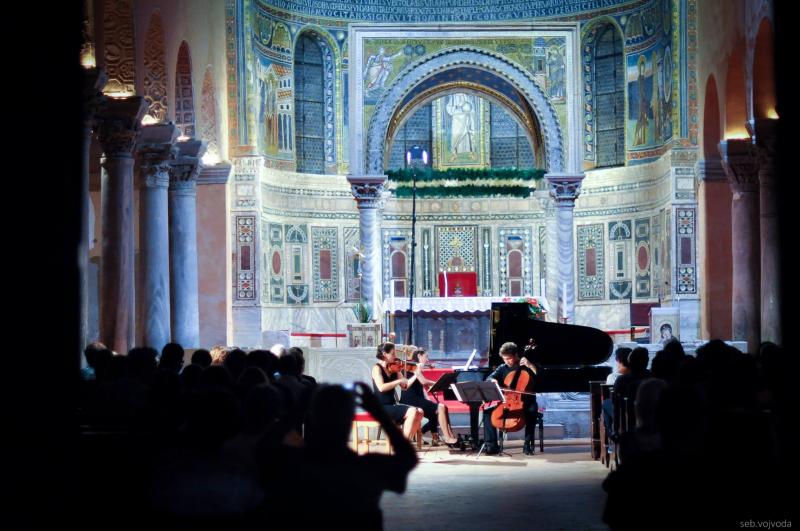 CONCERTS AT THE EUPHRASIAN BASILICA

Experience one of Croatia's oldest classical music festivals, where the magic of the notes blends with a unique ambience of the Basilica. The town's oldest musical event took place for the first time in 1962 and has since developed into a series of concerts that are traditionally held at the Euphrasian Basilica, a cultural monument inscribed on UNESCO’s World Heritage List in 1997. Numerous local and international musicians have given memorable performances there, so if you are a classical music aficionado, you should definitely consider attending the concerts that will be held at this majestic location once a week during July and August. Tickets are available at the entrance to the Basilica or can be purchased before the very concert.

The Lapidarium of the Poreč Heritage Museum offers a quaint stage to both local and foreign acts. The fans of jazz will enjoy an unforgettable atmosphere of an open-air festival each Wednesday during July and August, with a complementary refreshment beverage. Owing to its diverse, top-quality programme, Jazz in Lapidarium has ever since 1996 been a synonym for a fun summer in the town. From dance events at Trg slobode square to chamber music concerts in an intimate Lapidarium ambiance, one can experience authentic jazz expressions and improvisations from the world's best musicians. In addition to local music acts, as of 2018 the festival boasts a fresh visual identity created by the local designer Sabina Damiani. Jazz in Lapidarium has in the past several years taken place within the Poreč Open Air Festival, and is organised by the Poreč Open University. The programme always starts at 9 pm, and all concerts are free of charge.

OUR SONG IS BEAUTIFUL

Experience Istria’s traditional two-part singing: the first weekend of June each year, the Istrian Parliament Hall has for the past five decades been the home of a traditional meeting of choruses called Our Song is Beautiful (Naš kanat je lip). On those days the town echoes with local songs, promoting chorus singing and thus preserving both the Istrian tradition and intangible cultural heritage that inspires music writing in the UNESCO-protected Istrian scale, in the Chakavian dialect. The meeting also promotes the Our Song is Beautiful Collection, resulting from the tender for new compositions that is announced every other year, when the Collection gets promoted as well.

The Poreč Open University has for several decades been the meeting point of the Joakim Rakovac mixed chorus, with the Mosaico mixed chorus and the Le Parentine female vocal ensemble gathering at the premises of the Italian Community in Poreč. Every local event is an opportunity to enjoy their exquisite performances.