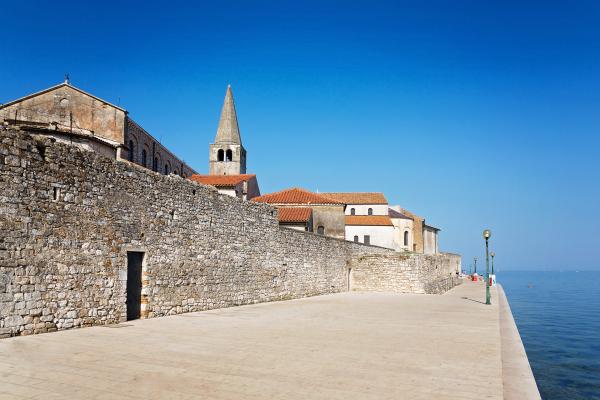 EAST TOWN GATES have not been preserved. However, the existing remains prove they had once served their purpose. One of its sides was reinforced into the Pentagonal Tower.

The town walls facing the land south of the Pentagonal Tower stretching to the Round Tower, the area where medieval houses were erected, have not been preserved. A part of the walls stretching from the Pentagonal Tower to the North Defense Tower of Peškera has been partly preserved, but in a rather poor condition. THE TOWN WALLS originate from the age of Antiquity, while the reconstructions and modifications, periodically carried out from the 12th until 16th century, were always done on the existing foundations. The most comprehensive reconstruction dates from the 13th century, when the town was governed by podesta Warnerio de Gillago. During the 15th century, facing with the threat of the Turkish invasion, particular attention was paid to the erection of defense towers, which have been preserved to date.

At one point in history, a trench was dug in front of the east town walls, which made Poreč an island, while the bridge leading to the town gates, discovered in 2005 during the renovation of the old town infrastructure, has been preserved under the pavement. Researchers have proposed the raising of the stone paved street on the point of the former bridge until the reconstruction conditions are met. This represents the entrance into Decumanus, the longest town street as well as the best place to start one's historical walk through Poreč.