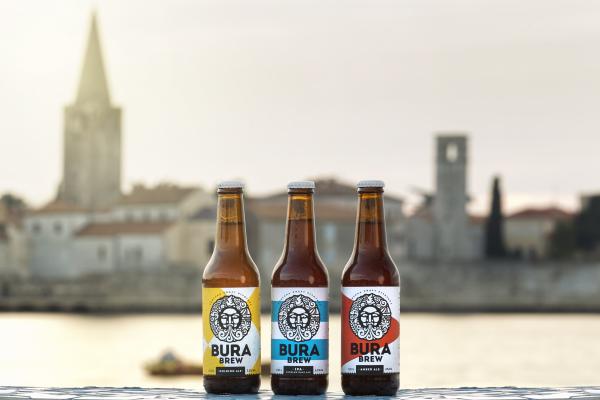 Just because Istria is widely known for its wines, doesn’t mean the beer scene of the region is hibernating. In fact, there is a growing number of small and independent brewers, whose original craft creations are thrilling the beer lovers.

This Poreč craft brewery started brewing beer in 2016, and has since invented several types of craft beer from just 5 top-quality ingredients: water, barley malt, low-content wheat malt, hop and yeasts. Its founders say they share an unbreakable bond with the bura wind after which the brewery was named (also depicted in the logo). The makers are proud of the ‘raw’ quality of their beer: yeasts play a major role in the production, but the final touch by Bura’s top brewer Claudio Rossi is crucial.

Bura Brew is open for anyone who wishes to have first-hand experience in the brewing process. If you are one of them, pop by to 26/19 Mate Vlašića Street, enter the Bura world and treat yourself to its wind-infused beer: the light Optimist, the amber Redsand, the one-of-a-kind Tornado IPA, the bold Hurricane IPA, or one from the limited edition.

In the first week of October, Poreč will host a festival that brings together Croatia's best small and independent brewers and street food chefs whose products make a perfect blend. This street craft story will have an audio background too – great concerts that will spice up the atmosphere in the Poreč streets.

Beer tastes better when shared with friends, so we're not starting without you!