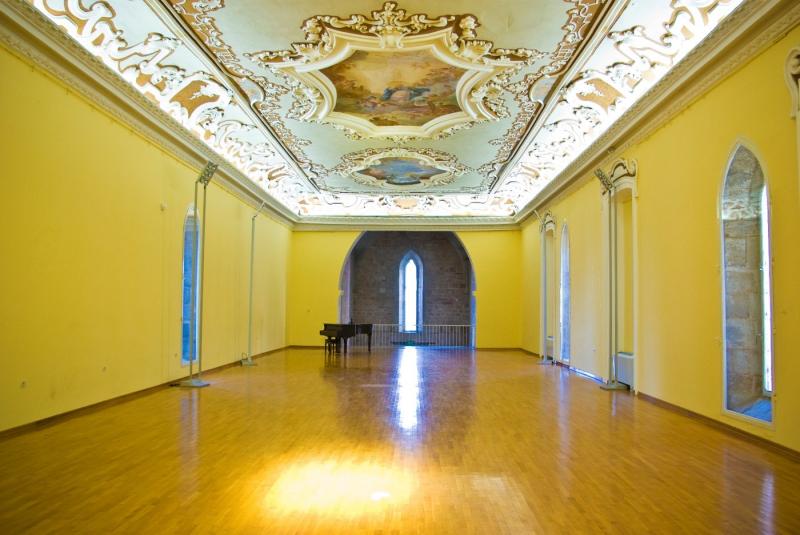 ISTRIAN ASSEMBLY HALL, once the church and the monastery of St. Francis built in the early 14th century is another multi-layered Poreč monument which size and purposes have changed through history.

The church and the monastery were erected on the foundations of the 5th century St. Thomas church as witnessed by preserved wall and floor mosaic small fragments dispayed on its ground floor under a transparent staircase leading to the ceremonial hall. It is not known when the monastery was abandoned. The written documents mention that the church was deconsecrated in 1806 during a short reign of Napolen. It was later purchased by Marquis Francesco Polesini, who had it horizontally divided into ground and first floors. In 1861, the first floor hall became the town hall of the Regional Assembly.

The ground floor was turned into a wine cellar with built-in glass coated barrels preserved until the present moment. The Istrian Assembly Hall features preserved rich pieces of stuccowork and frescoes which embellish the 25 meter long and 9 meter wide ceiling. The stucco was made by craftsman Giuseppe Monteventia from Bologna in 1751. Stuccoes frame three ceiling medallions containing frescoes – the biggest, showing the rendering of the Immaculate Conception, is placed in the middle while the side medallions show the Vision of St. Anthony of Padua and the Stigmatization of St. Francis. Frescoes were painted by Venetian painter Angelo Venturini parallelly with stuccowork. The precise year in which these decorations were made is known from a preserved document which mentions they had been donated by Franciscan priest Francesco Michiel who also had the St. Cross marble altar made for this church in 1727. Said altar is kept today in the church of Our Lady of Angels.